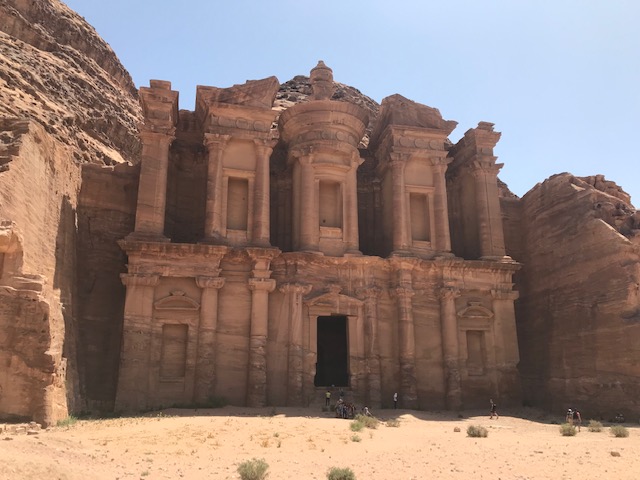 A visit to Petra is at the top of many travelers’ bucket lists. Chiseled out of sandstone cliffs, the Nabataean city of Petra is more than the famous facade associated with the name.  There are nearly 25 miles of trails (eight trails) and numerous monuments within the Petra Archaeological Park.

Entry gate personnel distribute park/trail maps with the ticket purchase (2-day ticket was 55 JD).  An increasing number of tourists (almost 800,000 in 2017) have been visiting Petra. Most don’t plan enough time to comfortably investigate more than just the main 5 mile trail.  Many travel post descriptions state that a visit to Petra can easily be accomplished in one day. I totally disagree and feel that it takes much more to absorb all of Petra’s cultural aspects. I stayed for 2 nights at the Movenpick Resort Petra (TripAdvisor) right across the street from the park entrance. It was a perfect location to easily head out each morning for an early start on the trails.

Over two thousand years ago, the rose-red city of Petra was a thriving trade center.  The Nabataeans eventually converted from wandering desert herders to controllers of desirable spices, aromatics and other coveted items.  The Nabataean Kingdom was probably at its height during the early 1st century A.D. under King Aretas IV. It is this king who may have been one of the three kings who visited Jesus at his birth.  It was not until after 106 A.D. that the Romans conquered Petra, though it remained a thriving commercial hub.  The people abandoned Petra after a series of earthquakes in 363, 419, and finally in 551 A.D.

Although most of the megalithic monuments still stand, many of the more rudimentary houses have eroded substantially.  Most of Petra is still undiscovered, with only about 15% of Petra has been excavated to date. Most of the Nabataean nomadic population lived in tents close by. But historians have estimated that perhaps 20,000 to 30,000 may have lived in Petra based on archaeological discoveries of the city’s public areas.

Many visitors are so excited to get to the Treasury building, that they do not notice the first major monument. Note:  I was one of those excited people who missed the massive 2-story building called the Obelisk Tomb. The Obelisk Tomb is carved into the rock on the left side of the main trail before the Siq. I only became aware of missing the building after I left! Perhaps I was distracted by the many offers for horse and buggy rides.

The Siq is the ¾ of a mile narrow gorge leading people to the famous Treasury building. It is said that Moses created the Siq when he struck the rock with his staff.  The Book of Exodus in one biblical version describes this, as well as what has been passed down in local tradition.  The Nabataeans were known to be expert engineers. They built channels into the sides of the sandstone walls, as well as dams and cisterns where needed.  The local Bedouins still use the cisterns outside Little Petra. Water channels and even sections of terracotta clay pipes (shown in the pictures) brought water into the city.

The pathway turns to cobblestone and small niches can also be seen carved into the Siq walls along the way.

Before coming to the end of the Siq, the Treasury building starts to come into view.  For years I imagined of the moment I would first start to see the Treasury building from the Siq. The extreme emotion I felt is beyond words. I had to stop several times to take pictures, as many other people do.

Stepping into the sunshine from the shade of the gorge in front of the massive cliff-works is so awe inspiring, it’s almost impossible to take in the full scale of the monument.

The Engineering Wonder of Petra and Its Trails

As an engineer myself, it is difficult to believe that the stonemasons of the time only used pick axes and chisels to carve such beautiful columns and pediments.  And luckily, archaeologists found unfinished facades at Petra to ascertain what their building methods were. The work actually started at the top where they wanted the top of the building to be.  There at the top, they worked their way down by first creating a flat area to stand on.  They then cut into the rock face, smoothed out the surface, outlined the building design, and chiseled out that level before moving to the next level.  They continued to work each level until they were ready to hollow out the rock to create the interior chambers.

You cannot go into these chambers, but the park pictures show one main area and two other side chambers.  In 2003, archaeologists found four burial chambers about 20 feet below the current ground level of the Treasury building. This suggests that the original ground level was much lower during the 1st century B.C. (as determined by the dating of the bone fragments in the tombs).  Although damage occurred to the reliefs on the outside in the 8th century and reconstruction of a fallen column was required, most of the facade is still intact.

Street of Facades and The Theater

Past the Treasury along the main trail, is the Street of Facades.  These are some rather tall facades that have small interior chambers.  One at ground level is accessible, but the others higher up would be difficult to access.

Just ahead on the main trail at the foot of the High Place of Sacrifice, you can see the Theater. In standard Nabataean fashion, it was carved out of the side of the rock face.  You can see some older tombs above the Theater seats.  The Theater could seat approximately 4000 spectators at once. And it’s the only theater in the world to be carved into rock.  The theater is not in as good condition as the ones I saw in Amman and Jerash.  Note:  To get to the High Place of Sacrifice, take the #3 High Place of Sacrifice Trail (1.9 miles long). The #3 trail cuts off to the left just after the Street of Facades.  But be aware that this is a very difficult trail with more than 700 steps.

The Royal Tombs of Petra

The Royal Tombs are located on the right a little past the Theater.  The Al-Khubtha Trail can be taken for a more up-close view of these tombs. The trail (2.2 miles) goes all the way to a 5th tomb (Unayshu Tomb) and has many steps. The main four tombs (Urn Tomb, Silk Tomb, Corinthian Tomb, and Palace Tomb), can be seen from the main trail.

The Colonnaded Street and Great Temple Complex of Petra

The existing Colonnaded Street columns were reconstructed in the 1960s due to their badly damaged state.  Flagstones partially remain throughout the street indicating how big the street might have been.

The Great Temple area rises over 80 feet above the Colonnaded Street on the left side. The temple complex takes up about 1.75 acres and was most likely more of a large palace and assembly hall.  The Great Temple is the largest freestanding building in Petra; the original temple itself estimated to have been almost 60 feet high.  Excavations and restorations are still taking place to reveal more about the temple complex.

You can see the Qasr al-Bint temple ruins to the left after passing the Arch of the Colonnaded Street.  The exterior walls of this freestanding temple still reach 75 feet high off ground level, approached by 26 marble steps. Although you cannot see into the temple interior much because of the barricades, it must have been quite impressive when first constructed.

The Monastery of Petra and Its Trail

In May, the temperatures at Petra can be brutal no matter how much water you drink.  I chose to go in May due to the lower volume of tourists.  So, there are good things and bad thing about going at this time of year.  I was hesitant to go to the Monastery with a previous heart condition since the #4 Ad-Deir (Monastery) Trail was over 800 steps – 1.6 miles – with estimates ranging from 1 to 3 hours time.

I asked at the Entrance Information Desk whether there was another way of getting to the Monastery if you had health issues.  Options did exist, according to the park employee. I could take a guided 4-wheel drive trip a back way past Little Petra, which I wanted to see anyway. The back way would take me to a trail that takes “only 35-50 minutes” to get to the Monastery.  It seemed like the perfect option for me, even if it was pricey at a cost was 160 JD. Note:  If things seem too good to be true, they usually are.

The Infamous “Back Way”

The back way to the Monastery took 3-1/2 hours (round trip). It was probably as difficult terrain and had as many stair steps as was stated with the #4 trail. Healthier trekkers were taking less time than I on the trail, but it was still a difficult trail.  Having said that, I made it to the Monastery, which was one of my goals.

Equally Breathtaking as the Treasury

The building was used for religious meetings and later converted to a Christian chapel, as can be seen by the crosses carved into the rear interior wall.  The Monastery was never actually used as a monastery, getting its name only from the religious uses.  The outside facade is not as elaborate as the Treasury monument; its columns are not free standing as with the entry-way columns of the Treasury.  But there is a massive urn on the top pediment.  Luckily, there is a small cafe across from the Monastery to get a cold beverage and rest before leaving.  The views on the trail to and from the Monastery were definitely breathtaking and dramatically isolated.  Taking the regular #4 trail to the Monastery costs nothing extra and probably takes the same amount of time.

Al-Beidha is one of the oldest settlement ruins in the Middle East, dating back more than 9000 years to the Neolithic Period.  The early people inhabited the area from about 8500 B.C. up to as recent as 5500 B.C. But when the people began to evolve from hunter-gatherers to farmers, they established this settlement. Archaeological work began at the site in 1958, with restoration and stabilization going on since 2001. Anyone can currently walk all around the ruins.

Similar to Petra, you approach Little Petra by hiking through a passageway called the Cold Siq. The passageway wall height prevents much sunlight from entering into the canyon, thus given the name. The Cold Siq is much shorter (about 437 yards long) and narrower than the Siq at Petra.

Little Petra housed travelers passing through to Petra on the Silk Road and was likely a suburb of Petra.   It is in Little Petra that the use of cisterns to catch water is much easier to see than in Petra.

Just in the last decade, archaeologists discovered painted frescoes on the ceiling of one of the caves.

Other Things to See in Jordan

While in Jordan, don’t miss all the other wonder sites to visit like one of the oldest maps in the world (on the floor of St. George’s church in Madaba). Check out the our blog here. And visit the ancient roman city ruins of Jerash.

Disclosure: The links in this post are “affiliate links.” This means we may garner a small commission at no cost to you if you choose to make a purchase.