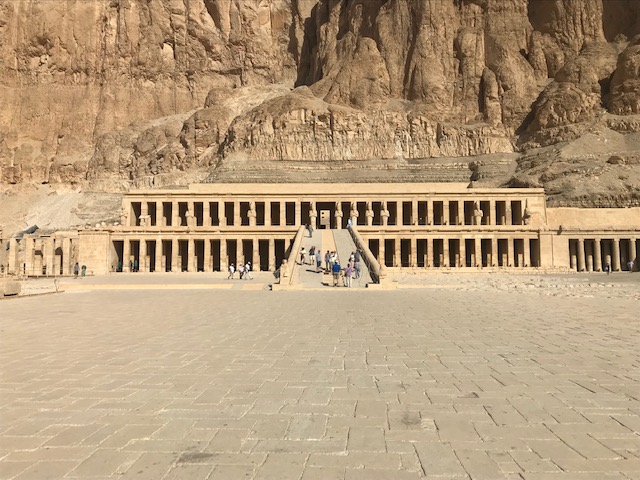 Once known as the ancient Egyptian city of Waset or by the Greek name Thebes, the city of Luxor in Upper Egypt offers so many things to see.  Most visitors to Egypt flock to see the pyramids, but I wanted to see all the other popular temples and tombs.  Before leaving the US, I booked 3 different tours so that I could maximize my 2-1/2 days in the city.

With so many possible things to see in Luxor, I booked the Full-Day Luxor Highlights East and West Banks Tour (TripAdvisor – Luxor Travels).  The tour included a qualified Egyptologist (mine was Omar Khalifa), transport by air-conditioned van, lunch, pick-up and drop-off at my hotel and all entrance fees for all sites.  Omar was absolutely the best tour guide I have EVER had on a trip. I thought $125 was an unbelievably great price for a private all-day tour.

The first item of things to see on the West Bank were two enthroned statues of Amenhotep III.  These statues originally guarded Amenhotep’s mortuary temple, which no longer exists. The temple was plundered for its materials by later kings and destroyed over time by annual floods. And the temple area is currently being excavated and is thought to have been one of the largest ever built in Egypt.

The rock-hewn Mortuary Temple of Hatshepsut at Deir al-Bahri is a breathtaking sight and the main reason I came to Luxor.  It is a momentous occasion to stand in front of this extraordinary monument rising out of the desert landscape.  Surprisingly, what you currently see as imposing terraces, is a monument that has undergone extensive reconstruction over the years.  Thutmose III removed a lot of his step-mother (Hatshepsut) from the history of the temple.  And although it looks like one large temple, it is actually a composite of three temples: Temples of Montuhotep II, Thutmose III, and Hatshepsut.  I was able to see the main sanctuary dedicated to the Egyptian god Amun-Ra that opened to the public December 2017 after 55 years of restoration.

Valley of the Kings

To date, they have found sixty-three tombs in the remote necropolis of the in the Valley of Kings.  Although they thought the remoteness would keep robbers out of this area, only three tombs were found still intact.  The most famous is the tomb of Tutankhamun, discovered by Howard Carter in 1922.  Only 8-10 tombs are currently open to the public. In order to preserve the sites, they rotate which tombs will be seen by visitors throughout the year. But your visitor tour ticket allows you to see 3 of the tombs. I was able to see the tombs of Ramses II, Merenptah, and Ramses IV. If you want to view Titankhamun’s tomb, it will cost you extra.    Although you cannot take pictures inside the tombs, you can enjoy how vivid the colors are on the walls of these tombs.

My guide stopped at one of the government-regulated alabaster shops on the road from Hatshepsut’s Temple.  I learned how the alabaster rock is quarried and later fashioned into beautiful vases and other artwork.  And I found out how to tell the difference between the real alabaster and a fake, noting that fakes are often promoted across Egypt.  Like many tourists, I brought a couple of small pieces home as gifts.

Lunch at a Roof-Top Restaurant

We stopped for a lunch at this amazing roof-top restaurant to have some traditional Egyptian food before heading back across the Nile to the East Bank.  There was so much food and it was all fantastic.  I only wish I had written down the name of the restaurant.  I was nearly the only one there since it was during Ramadan and most people including my guide were fasting.  While I sat at my table overlooking the Nile, I pictured what it might have been like living there 2000 years ago.

Next, we needed to cross back over the Nile so that we could visit all the things to see in Luxor’s East Bank.  The Luxor Temple is right in the center of town near the East Bank of the Nile.  You can see two gigantic seated statues of Ramses and a huge 82-ft. high pink granite obelisk at the gateway into the temple.  The Abu al-Haggag Mosque towers over the courtyard to the east.  The entire temple was once buried by debris, which can be seen by the difference between the height of mosque above the stone floor and the temple wall before it was rediscovered.

Two more giant blank granite statues of Ramses guards the entrance to the original part of the temple. An avenue of fourteen columns follows called the Colonnade of Amenhotep III.  The colonnade leads into the Court of Amenhotep III that has a well-preserved double-row of towering papyrus-looking sculpted columns.

As I walked through each set of pylon gates through a succession of courtyards, I was more and more impressed as I went.  An enormous granite Colossus of Ramses II statue stands at the entrance to the Great Hypostyle Hall.  This cavernous hall was once supported by 134 massive columns.

In the center of the temple complex is the reconstructed Temple of Amun.  You can still see some of the vividly painted hieroglyphs underneath the porticos between columns.

We stopped at a shop that sold papyrus artwork, where the owners demonstrated how papyrus paper was made in ancient times.  It was interesting to see the curators take the papyrus reeds, cut them, soak them, lay them out appropriately, press the excess water out using a book press, etc.  The process actually takes a number of days to do it right.  Their gallery had displays of various Egyptian art drawn on their papyrus for sale, if you chose to purchase any.

Although not normally part of the tour, I wanted to go to a jewelry shop sometime during my visit to Luxor to buy my daughter a gold scarab pendent and necklace.  My tour guide was flexible enough to take me to a reputable shop so that I could look for one.  I found a perfect one for her that was gold on one side and blue lapis lazuli on the reverse.  My daughter loved her scarab pendent, the Egyptian symbol of rebirth.

I booked the Half-Day West Bank Tour (TripAdvisor – South Sinai Travel).  Again, the tour included a qualified Egyptologist, transport by air-conditioned van, pick-up and drop-off at my hotel, and entrance fees for all sites.  I had purchased the half-day excursion for the same west bank sites thinking I might need more time to see everything from the first day.  However, I did not need the extra time after all. I asked the tour company if they would be flexible enough to show me other sites that I had not been to the day before.  I was thankful that they were very amenable to that.  So instead, I was taken to the Medinet-Habu Temple and Deir el-Medina instead. This half-day tour cost $105.

Other Things to See in Luxor – West Bank

Deir el-Medina (Village and Tombs of the Workers)

This area was the only place that the workers and their families lived while they were building the tombs in the Valley of the Kings and Queens.  Having the workers live at a village located between the Valley of the Kings and the Valley of the Queens was the only way to preserve their secret location.  The workers left a record of their village life, a record that spans nearly 400 years.  The worker tombs were also nearby.   Accounts left by the workers indicate that they worked 10 days then had 2 days off.  They spent their free time working on their own tombs, making other coffins and funeral trade equipment, and otherwise living a normal life.

This is the mortuary Temple of Ramses III. First excavated in 1859, this temple is probably one of the least visited sights, even though it’s nearly as big as Karnak Temple.  The entire population of Thebes would take refuge inside these temple walls during invasions later in the 20th Dynasty.  The temple was later taken over by the Coptic Church.  The first pylon holds massive reliefs showing Ramses defeating the Nubians on the left and the Syrians on the right. Inside a relief shows scribes tallying the severed hands of defeated enemies, which was their traditional method of keeping track.

On the opposite wall, the engravings are very deep, supposedly to prevent removal like what happened at The Temple of Hatshepsut.  And again, the color pigments were vibrant in many locations. The Hypostyle Hall is very similar to what I saw at Karnak.  24 hieroglyphic-covered pillar bases remain in the hall.

I booked this Felucca Ride on the Nile at Sunset (TripAdvisor – Nile Holiday) also before I left the US.  Again, the tour included a qualified Egyptologist, pick-up and drop-off at my hotel, and the felucca ride on the Nile to and from what was called Banana Island (Gezira el-Mozh).  My guide was friendly, knowledgeable, and made the cruise down the Nile so interesting.  The tour was only $50.

I never pictured getting bananas from this region, but they were so flavorful, as was the watermelon.  The round-trip ride took several hours and was timed perfectly to enjoy the sunset on the way back from the island.  I was able to see Luxor Temple and Karnak Temple from the river perspective and enjoy seeing the different waterfowl that get their sustenance from its waters.  We also saw the Winter Palace (now a hotel), founded in 1887, off on the east bank just south of Luxor Temple.

Other Places to Visit in Egypt

Of course one of the main places to visit is Cairo to see the Pyramids of Giza. Be prepared for the crowds there compared to Luxor or go during the off-season as I did. Check out my visit to the pyramids here.

Disclosure: The links in this post are “affiliate links.” This means we may garner a small commission at no cost to you if you choose to make a purchase.