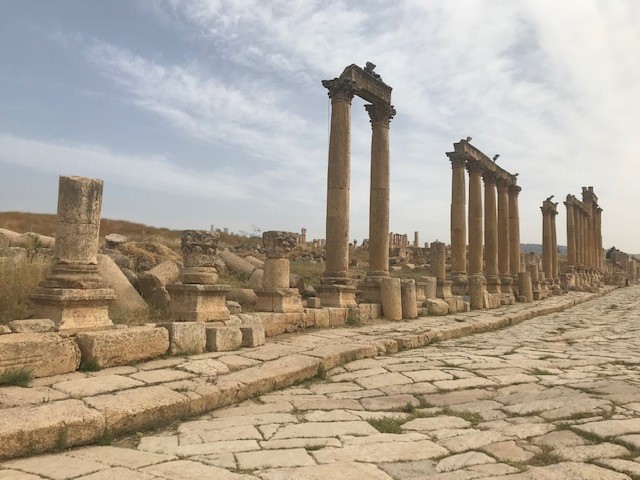 The historic ancient ruins of Jerash are about an hour drive straight north of Amman, Jordan.  Most tourists focus on visiting Petra (and who could blame them) when traveling to Jordan.  But then visitors underestimate the time needed in Jordan and miss the other amazing attractions this country has to offer, like the ancient roman ruins of Jerash.  Check out TripAdvisor for the various options for tours leaving from Amman.

Don’t Waste the Drive to the Ancient Ruins of Jerash

I was in awe of the beauty of the surrounding countryside on the way to the ancient ruins of Jerash.  The charming hill-covered region reminded me more of an Italian postcard than of the desert-like areas pictured for most of the Jordanian terrain.  And you should stop to see the King Talal Dam about half-way to Jerash, which was constructed to store winter rains and treated wastewater from Amman and Zarqa for irrigation of the Jordan Valley.

The Arch of Hadrian

The site is well preserved and extensive, so allow at least 2-3 hours to visit the main ruins.  Due to construction, I entered the site at the relatively remote southern end of the ancient city and headed through the Arch of Hadrian, also known as the Triumphal Arch.

The Romans erected the arch, which currently stands 36 feet high, in honor the Emperor Hadrian around 130 AD. Historians believe that the arch was intended as a southern approach for the city after future development, although the planned expansion was not executed.

When the city expansion was abandoned, the western side of the city was free to build its hippodrome.  The Jerash hippodrome (meaning, “circus”) is the best preserved of the Roman Empire, even if it may have been the smallest.

Built for chariot racing, the hippodrome measured about 820 feet in length by 164 feet wide (about the width of a football field, but nearly triple the length).  Up to 15,000 spectators attended the races. Later in the 4th century, gladiator fights and other sports moved to the amphitheater.  Then in the 8th century, plague victims were buried where the hippodrome is located in a mass grave.  The great earthquake of 749 AD led to its final ruin.

I made my way toward the Forum Cardo, after passing through the South Gate.

The two-tiered south theater is the largest of the two theaters and is in remarkable shape.  The current city of Jerash still uses the amphitheater for concerts, local performances, and during the Jerash Festival of Culture & Arts.  A member of the Jordanian Armed Forces Bagpipe Band was demonstrating the amazing amphitheater acoustics when I was there.

The Temple of Zeus was built around 162 AD, which overlooks the oval plaza and is adjacent to the south amphitheater.

Miscellaneous Attractions of the Ancient Ruins of Jerash

I walked down the colonnaded street, picturing in my head the chariots with their riders.  First, I arrived at the remains of the Macellum (trading yard) on the left with an octagonal pavilion in the middle.  Next, the agora and the nymphaeum (ornate public fountain) appear to my right about half-way to the North Gate.  Further north, the smaller north amphitheater stands as a reminder of just how big the ancient city of Jerash was. The ruins of Temple of Artemis, to the west of the theater, had much of its material later reused for new churches.

Before You Leave the Ancient Ruins of Jerash

Do not miss the small, but interesting Jerash Archeological Museum that contains a variety of artifacts found on the site, like coins, statues, and sarcophagi.

Want to know more about travel in Jordan? Check out TripAdvisor.

Photo Journalist @TerraInvictus Although the earth is becoming smaller with the level of communication, ease of travel, etc., there’s more to see!