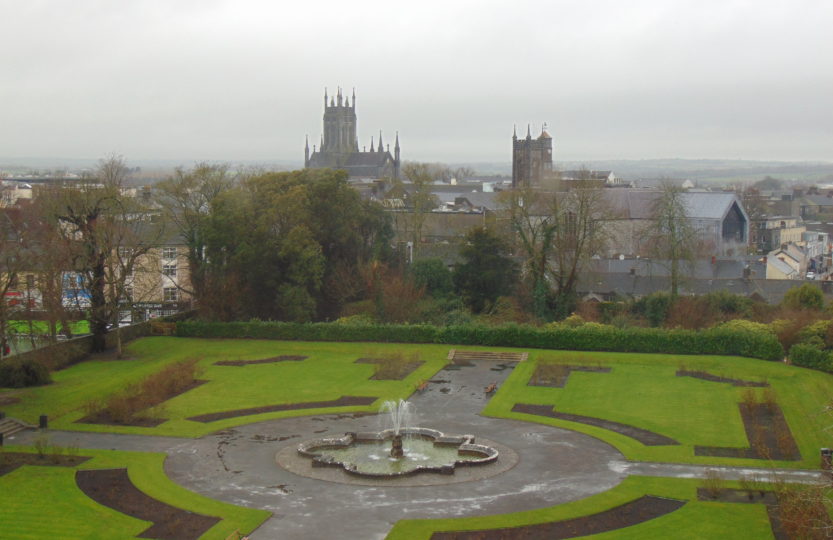 There are so many things to do in Kilkenny, Ireland, like attending the Kilkenny Arts Festival held every August.  I visited Kilkenny mainly because of its rich medieval history and because it was once considered an unofficial capital of Ireland.  But other than the festival, there are so many other things to do in Kilkenny that I spent nearly a full day walking around this delightful medieval town.  I decided to first start at the Kilkenny Castle, parking my car along the Castle Road.  It was a perfect spot to begin my Medieval Mile tour of the city.

The castle sits adjacent to the River Nore on high ground not far from John’s Bridge. Although construction started in 1195, it was not completed until 1213.  James Butler bought the castle in 1385 and his dynasty ruled the surrounding area for centuries.  The paternal grandmother of Anne Boleyn (second wife of King Henry VIII of England) was Lady Margaret Butler.  Lady Butler was born in Kilkenny Castle and later married Sir William Boleyn.  The Butler family members owned the castle and lived there until 1935.

Later, the people of Kilkenny (particularly the Castle Restoration Committee) bought the castle for a token payment of £50.  Only three of the original four towers survive today.  You now enter the castle through an elaborate gate added in the 17th century.

I walked the castle perimeter and exterior gardens that were pristine and summoned within me a calming effect.

I walked through the ground floor where I could view the Chinese Withdrawing Room and the State Dining Room.  I took the Grand Staircase, built in the 19th century, up to the Tapestry Room.  All the way up, I felt the marvelous mahogany wood sliding under my hand.

A series of tapestries covers the Tapestry Room in the North Tower, which depicts the story of Decius Mus, a Roman Consul who sacrificed himself to enable the victory of the romans against the Latins.

Next, I visited the Library.  A firm in Lyons, France was able to reproduce the original pattern and color of the French silk wall fabric of the Library. In addition, based on the original design records and receipts, they were able to restore the carpet as well.

The Butler family portraits cover the walls of the Picture Gallery built in the 19th century.  The long gallery room is second only to the Long Room of the Library at Trinity College in Dublin.  A Carrara marble fireplace with foliage carvings stands in the middle of this great hall.

Next on my things to do in Kilkenny was to visit the Castle Yard, which is across from the Kilkenny Castle.  The state sponsored conversion of the buildings in the Castle Yard into the Kilkenny Design Workshops was done to improve the exportation of Irish products.  To illustrate, the five workshops are for silver and metalwork, textile weaving, textile printing, ceramics, and woodworking.  The gallery next door has a collection of shops that brings together these artisan crafts from all over Ireland.  I bought some yarn made by the locals to take home to my sister who loves to crochet.  They have exhibitions put on by the Design & Craft Council of Ireland and offer various participatory workshops.

There are so many things to do in Kilkenny that I had to narrow down how many historical venues I could squeeze into my visit to just those places along the Medieval Mile.  Next, I continued walking northwest down High Street to the city’s town hall called the Tholsel. The Tholsel remains the seat of their local government, counthouse, etc.

St. Canice’s Cathedral and its Round Tower

St. Canice led worship for Christians on the site during the 6th century. Therefore, the city erected the cathedral there in the 13th century. They built a 100 ft. round tower in the 9th century, which stands adjacent to the cathedral.  Similarly, there are only three remaining round towers dating back to this period left in Ireland.  The tower can only be accessed by a steep set of ladders and may have been a watchtower at one time.

A row of black marble clustered columns with high mounted arches runs the whole length of the church from the nave to the choir area.  Moreover, the cathedral is a massive seventy-five yards long by forty-one yards wide.

And the carvings are so ornate on the choir stalls/seating on the north and south aisles.  Many of the cathedral stained glass windows are replicas of the 13th century originals.

The cathedral has many ancient monument and tombs of bishops, as well as several owners of the Kilkenny Castle.

Close to St. Canice’s Cathedral is the Black Abbey.  The Dominican Friars founded the Black Abbey in 1225, which got the popular title from the black cappa worn by them over their white habit. Thus, they became known as the Blackfriars.  This is one of the oldest churches still in use after nearly 800 years in Ireland.  It is amazing to think that this church stood for 270 years when Columbus sailed.

I found the Rosary Window to be breathtaking. First of all, the stained-glass window is Ireland’s largest. And second, it has remained intact for centuries. Mayers of Munich created the window in 1892 and it shows the Mysteries of the Rosary.

A glass case near the Rosary Window holds a sculpture of the Most Holy Trinity made in alabaster.  It shows God the father enthroned holding a crucifix with a figure of his Son, and a Dove representing the Holy Spirit sitting on the crucifix.  Amazingly, restorers found the sculpture hidden in one of the walls of the church.

St. Mary’s Cathedral was built between 1843-1857 and is accessible from the Black Abbey via Black Mill Street.  The cathedral sits on the highest point in the city and is made of cut-limestone sourced locally.  In particular, the central tower stands over 186 feet tall and can be seen from almost anywhere in town.

I went to Kyteler’s Inn next to have a late lunch and a pint of the local Smithwick’s Irish Ale.  This ended up being one of my favorite things to do in Kilkenny!  Kyteler’s Inn was established by Dame Alice de Kyteler in 1324 and is one of Ireland’s oldest inns.  The Bishop accused Alice of witchcraft in Europe’s first witchcraft trial.  She escaped to England due to her connections with the local gentry.

To illustrate, a life-size bronze statue of the famed witch sits at the front of building, reminding you of the history that haunted medieval times.  No one knows what happened to her after she left.

The restaurant offers fantastic home cooked meals and many traditional dishes in a casual dining setting (check out TripAdvisor for reviews).  Moreover, it has a unique atmosphere that takes you back to the medieval times.  For example, my table was honed from an old tree and the brick arches of the building added to the ambiance.

In brief, the Medieval Mile Museum opened in February 2017 and displays many of the artifacts of the time period.  The city renovated the church in a way to preserve what was originally built in 1205, but also to showcase the new museum. As a museum now, it shows numerous historical documents over the long history of the Medieval City of Kilkenny.  Neolithic period stone sculptures stand throughout, some over 5,000 years old.  The non-guided entry costs €6. Go to TripAdvisor for museum reviews.

Overall, not only are there a lot of things to do in Kilkenny, but the city’s compactness allows you to explore the whole city on foot.  I did not leave myself as much time as I would have liked, thinking most of a day would be fine.  But I would have loved to have spent more time – so leave yourself enough time to experience it all.

For a place to stay close by, check out Knocktopher Abbey.