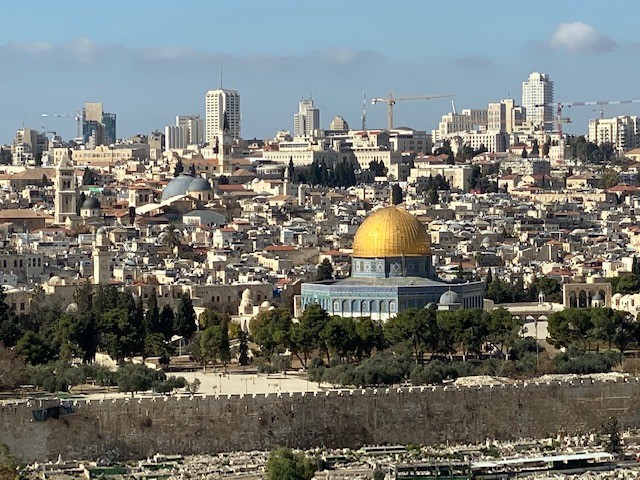 Last week, I started thinking about the trip I took to Jerusalem last December, where I found myself walking “the” walk that most Christians consider a lifetime opportunity.  I’m talking about the walk Jesus took along the Via Dolorosa to Golgotha carrying his cross before his crucifixion.  Walking “the” walk transformed the Easter holiday for me this year.  But I’m getting ahead of myself.  I first started my shadowing of that agony period in history at Gethsemane.

The Sanctuary of Gethsemane – Before Walking “The” Walk

The Garden of Olives

I was surprised to find out that olive trees are one of the longest lasting trees.  And the actual Garden of Olives located above and to the right of the Grotto of Gethsemane still has eight very old olive trees.  Tradition holds that these trees were there when Jesus was praying the evening before His crucifixion.  And it is in the grotto at the base of the Mount of Olives that He was betrayed and arrested.

They built the Basilica of Agony on that site to recall how Jesus agonized over us to the point of sweating blood (Luke 22:44).  And they moved the stone where He bled into the basilica to rest at the base of the alter.

Via Dolorosa – Walking “The” Walk

The Via Dolorosa is in the Christian Quarter of the Old City of Jerusalem.  The route is about a half mile long meandering through various streets and ends in the Church of the Holy Sepulcher.  There are 14 Stations of the Cross along the way, the final 5 of which are at the Church.  I walked the path starting at Station V shortly before where Jesus had fallen the second time. It is there that they believe he touched his hand against the adjacent building (see picture).

That was where Simon of Cyrene helped Him carry the cross.  Then, I stopped at Station VI. This was where St. Veronica lived (see picture) and had wiped Jesus’ face with her veil, which was said to be imprinted with His face.

Church of the Holy Sepulcher – The End of Walking “The” Walk

No one knows for sure where Golgotha was.  However, the mother of Constantine I, and since the 4th century Christians, have identified the site as the likely place.  They built the Church of the Holy Sepulcher on this site believing it was where the crucifixion, death, and burial occurred.

I could immediately see the Stone of Unction (or Stone of Atoning) as I stepped inside the church. Jesus’ body is believed to have been placed on this stone after the crucifixion.  And it is here where His body would have been anointed with oils, wrapped in shrouds, and prepared for burial.

The site of Jesus’ empty tomb is the final station (Station XIV).  I felt that the shrine was so small that was erected around the tomb, but yet it was so ornate. And I thought the massive dome above the shrine (called the Aedicula) looked like the one in the Pantheon.

When to Walk “The” Walk

I decided to do the walk as early in the day as possible since this is a huge pilgrimage site, even though it was off-season and not as busy.  Obviously, going Good Friday through Easter Sunday would be one of the busiest times and not recommended.  You do not need a tour guide and can purchase a map of the Old City in most gift shops in the market.

The Franciscan Monks walk the Way of the Cross every Friday and you can join them when they start their walk at 3pm (or 4pm during the summer).  Be sure to wear appropriate clothing, which includes covering your shoulders and knees to enter the churches.  Also, I recommend wearing the right footwear since the pathway is of the old cobblestones and it is easy to trip on the uneven surfaces.