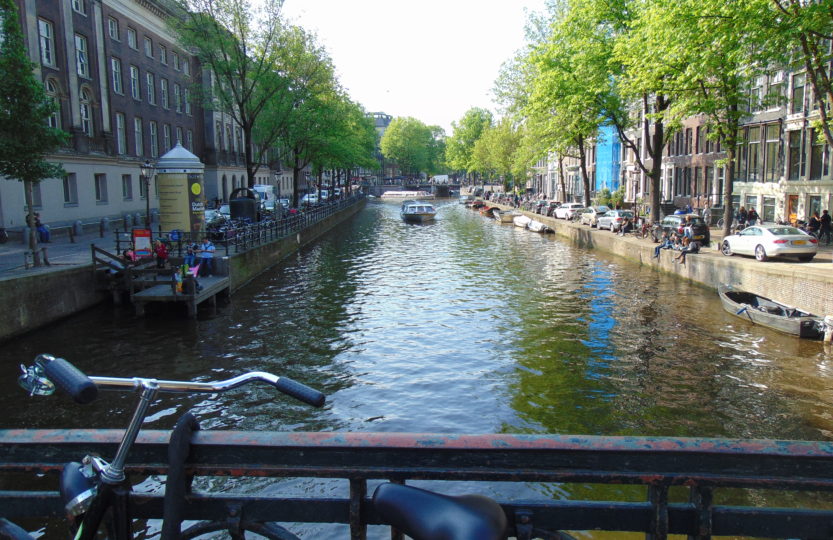 When I found out that I would be traveling to Amsterdam in May, I searched for a hotel that would be right on one of the canals, be central to visiting a lot of the museums, and be unique in some way. I didn’t realize that so many hotels might meet those criteria. However, I found that the American Hotel Amsterdam appeared to be a great option.

THE HOTEL
The American Hotel Amsterdam was built in the late 1800s in the heart of Amsterdam on Leidseplein (Leidse Square) in the southwest of the canal ring. An expansion was added to the hotel in the late 1920s. Upon arriving, I was immediately impressed by the friendliness of the staff and the art nouveau inspired hotel. There’s an instant homey feeling when you check-in instead of some ostentatious grand entrance overwhelming your senses. During my discussion with General Manager, Mr. Max Hermers, I discovered a few things about the hotel that were not mentioned on their website.

First, the American Hotel Amsterdam was the first hotel in Amsterdam to take on the American hotel model of having an en suite bathroom, as opposed to the European model of having a communal bathroom at the end of the hall used by all the guests on that floor. Second, it was the first hotel in Amsterdam to have an elevator (hand operated). Thirdly, not all hotels can boast the historical nature of hotel guests returning to where their great-grandparents celebrated their honeymoon! And lastly, the hotel has generally maintained an very high occupancy rate, according to Mr. Hermers. 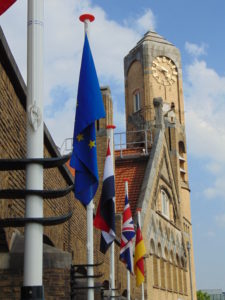 ACCOMMODATIONS
The hotel has 175 rooms, some of which are currently undergoing renovations. I stayed on the 4th floor in a spacious balcony room overlooking the Singelgracht Canal. The room had just been renovated, keeping with the art nouveau theme of the hotel. It was calming to leave the balcony door open at night and sleep with the breeze coming off the canal below. The king size mattress and soft linens made it even easier to sleep comfortably through the night.

The room had an open-planned bathroom concept; although the luxurious soaking tub/tiled walk-in rainfall shower area and the toilet area are in their own separate enclosed spaces. The double sinks were in the room hallway with rather dim lighting, making it a challenge for women to apply make-up or men to shave. However, there is a small sink in the toilet area that has excellent lighting and a mirror. All rooms are stocked with nice cotton robes and slippers, with plenty of soft cotton towels. The WiFi was consistently strong in all hotel areas during our 4-night stay and was free to all guests. 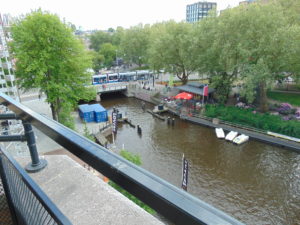 FOOD
The hotel has one restaurant, Café Americain (intertionally spelled this way), which serves reasonably priced and delicious food in their famous art nouveau setting. Breakfast has a rather average and small buffet-style offering for the price (EUR 22.50) of standard pastries and breads, cheeses, and meats, with tea or coffee. But I suggest choosing off the a la carte menu – pancakes with elderflower syrup, whipped cream, and powdered sugar, along with a side of crispy bacon from local monastery pigs. For me, it was such a perfect breakfast, along with great coffee (of course), that I ate it several times during my stay. The sun streaming in through the original stained glass windows made the breakfast taste even more heavenly.

At dinner, the ambiance in the restaurant transports you back to the early 1900s, with the lighting lowered in the antique wall sconces and Tiffany-like ceiling lights. The roasted chicken in its Café Americain sauce and the codfish baked in citrus oil with mushrooms and caramelized onions in a bouillabaisse sauce were both excellent.

A spacious area of outdoor seating is offered overlooking the fountain, as well as the indoor seating. In addition, the hotel Bar Americain (which also has seating inside and outside), has welcomed many international celebrities, as supported by their framed pictures covering the walls. 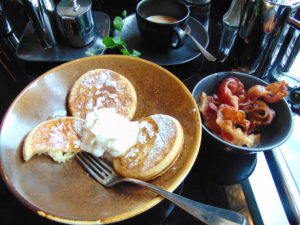 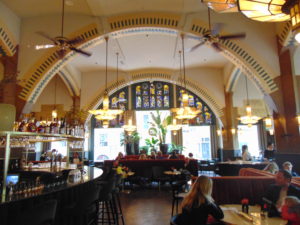 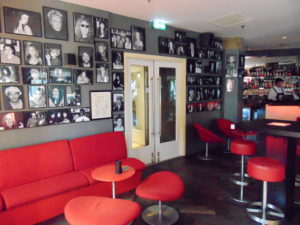 NEAR BY
The hotel is only a 10 minute walk to the Rijksmuseum (and the “I Amsterdam” sign), Modern Art Museum, and Van Gogh Museum. In between the hotel and museums are a number of great restaurants, including Sushisamba (Japanese) and Bakery Café/Ristorante Pizzeria which were both enjoyable.

Directly off to the northeast from the hotel in Leidseplein square are more places to eat than you can count. Hungry for a steak one evening, we ate at the New York Steak House there that has second-story seating on the balcony overlooking the square where we sat watching people hustling about on their daily commute home. 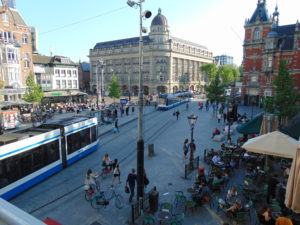 OTHER
Guests at the American Hotel Amsterdam can use the sauna and exercise facilities on the lower level of the hotel. A mezzanine relaxation area offers a bookcase full of books and plenty of comfortable armchairs looking out the window to the canal or over the staircase that opens to the lobby below. I appreciated the historic photographs that hung on the hotel lobby walls, as well as the various antique objects that were displayed in the lobby curio cabinets and trunk. 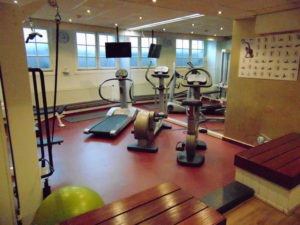 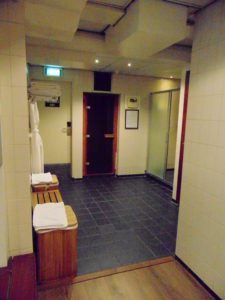 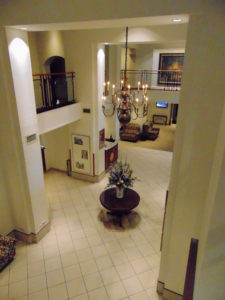 The closest parking is in the Q-Park Byzantium about a 5 minute walk across the canal from the hotel. I was traveling by car to Belgium after leaving Amsterdam, so I did use this parking garage for a few days. It is rather expensive at EUR 68 per 24 hours, but you do get a discounted rate if you consult the concierge.

Public transportation from the Amsterdam Central Station takes you to the Leidseplein stop in about 10 minutes, which is right in front of the hotel (take Trans 1, 2, or 5). From the Amsterdam Airport Schiphol, take bus 397 to the Stadhouderskade stop, which is about a 3 minute walk from the hotel.