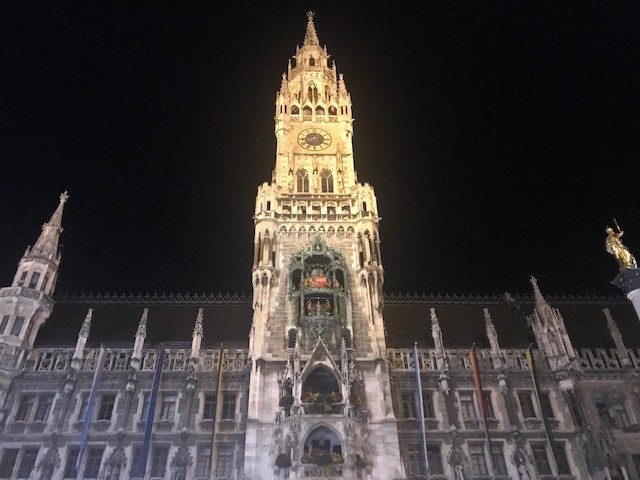 While standing in front of the Rathaus Glockenspiel in Munich, Germany during Octoberfest week, it occurred to me that I must have an affinity for famous clock towers.  Although I had seen the Glockenspiel many times in my life, I never tire seeing the reactions of the tourists when they see it for the first time.  And as I stood there, I realized that I had seen many such old and famous clock towers throughout Europe.  I consider the famous clock towers listed below to be some of the best ones if you are going to go traveling in these areas.

The famous clock tower was being renovated when my daughter and I visited Munich in 2006. Since it was shut down for repairs, my daughter didn’t get to hear the bells or see the figures dancing. When I went back in 2019, the carillon still sounded off to me, even though some say it had been fixed since it was left out of tune by the renovation. Or maybe it was one of the 43 bells that was off. But at least I got to hear it and see it moving again.

The glockenspiel stands at 260 feet tall and was built in the 16th century. You have to see the 32 life-sized dancing figures to believe the amazing 15 minute show.

Just blocks away from the Glockenspiel is the Frauenkirche (Cathedral of Our Lady) with its distinctive twin towers.  They finished the towers in 1525, which stand at about 323 feet tall.  Each tower has ten bells cast between the 14th and 21st centuries and have fairly plain clock faces.

And St. Peter’s church is across from the Rathaus a block away (in the picture above to the right of the Hofbräuhaus), which probably has the best view of Munich from its famous clock tower caged viewing area.  St. Peter’s clock tower that stands 299 feet tall and was built in 1368.  You can take stairs to the viewing area that has a 360-degree view of the entire city.  The tower has eight bells.

The Bedford Tower is located at the Dublin Castle. The tower was named after the Duke of Bedford and built in the 1750s. The Irish Crown Jewels were stolen the day before a visit from the King and Queen in 1907 from this famous clock tower.  And they never found the jewels or the thief that stole them.

They constructed the plaza itself in 1755.  But the famous clock tower is featured in the middle on the north side of the plaza. The original design had two additional towers on each side of the clock. However, they never completed these due to weight limitations. Read more about our trip to Madrid here.

I visited Copenhagen in August 2018 for the 175th Anniversary of Tivoli Gardens (read more on where Disney got his theme park inspiration).  But I also wanted to see this unique astronomical clock, displayed in the Copenhagen City Hall.

They named the clock after the man who designed the clock and took part in its construction until his death.  However, operation of the clock did not start until 1955. So, he never got to see it operate.  In addition to showing the time, it displays the positions of various stellar bodies, lunar and solar eclipses, and is a perpetual calendar.  This clock could continue to run forever if wound once a week on schedule. However, mechanical clocks like these are obsolete and have been replaced by atomic clocks.

We saw this famous clock tower in 2007, which is probably one of the most recognized clock towers in the world. They completed “Big Ben” in 1859.  It currently takes you 334 steps to go from the ground to the belfry.  However, if you don’t want to take all those stairs, wait to go until 2021 when the renovations (started in 2017) are completed to add an elevator.  Big Ben is a simple clock, with only a numerical clock dial face.  Quarter bells chime every 15 minutes before Big Ben rings out on the hour.

The Prague astronomical clock is one of my favorites and one of the oldest famous clock towers in the world still in operation, dating back to 1410.  My Mother and I visited Prague to see it in 2008. It displays the position of the Sun and Moon in the sky, a movable ring denoting the zodiacal signs, etc.  And they added more details over the years, like statutes of various saints, promenading figures of the Apostles, the skeleton figure of Death, etc.  For more about the Old Town Hall and astronomical clock and things to do in Prague, read our article here and the reviews at TripAdvisor.

I thought this was one of the most beautiful clock towers. The people of Bruges consider it their “leaning tower” because it leans about 34 inches to the east. And the Bell Tower of Bruges in Belgium has a few more steps than Big Ben (366 steps).  They rebuilt the tower in 1280 after a fire.  And added a carillon in the 16th century, with more bells added throughout the years.  There are now 47 bells.

There are actually two famous clock towers in St. Mark’s Square.  I had travelled to Venice the first time when I was 13 years old. They built the original tower in 900 A.D.  Because of earthquakes, fires, etc., the tower has been rebuilt many times.  The current tower, rebuilt after a 1902 complete collapse of the old one, looks the same but reinforced to its height of 324 feet.  I forgot about the other clocktower that was in St. Mark’s square after being so excited to be back in Venice with my daughter, walking the city for 2 days (oh, my feet), and taking hundreds of pictures!

The Torre Dell’Orologio (Clock Tower) was built between 1496 and 1499.  Looking directly at St. Mark’s Basilica, you can see the clocktower off to the left side, but I did not take a picture of it looking dead-on.  However, you can see the two bronze Moors on the top that strike the bell on each hour.

This clock has more to offer the viewers than the campanile because it not only shows the hours, but shows the phases of the moon and the signs of the zodiac.  Also, at certain times of the year, the Three Kings are led by an angel each hour past the Madonna sitting above the clock face.  The archway below the clock leads to a passageway directly heading you from St. Mark’s Square to the famous Rialto Bridge. Check out reviews at TripAdvisor.

The Amsterdam Central Station was constructed in 1881 and has two towers.  One tower has a clock and the other one has a read-out from a wind vane that rests on the top of the building.  The clock assists the railway industry and the weather vane helps the maritime folks prevalent in the Netherlands.  We saw the building on our canal tour. The designer of the building was the same one that designed the Rijksmuseum – see its similar clock towers below.

Also, the Hotel Amsterdam (read our review) will be celebrating its 100th anniversary soon (built in the 1920s).  It has a beautiful clock tower overlooking a canal.  We stayed in the hotel and loved its art nouveau styling and its proximity to the things we wanted to see in Amsterdam. Check out other reviews at TripAdvisor.

I visited the Helsinki Cathedral in 2018. The cathedral was completed by 1852 and has a clock tower in the middle and two free-standing bell towers.  The design of the cathedral is in the shape of a Greek cross (symmetrical four equilateral arms from a square middle).