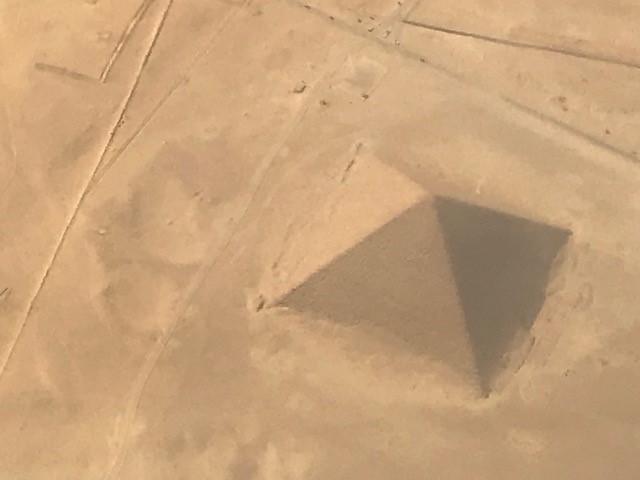 One of my goals has been to visit the sites of at least 6 of the 7 Wonders of the Ancient World.  Historically, the Hanging Gardens of Babylon are thought to have been in present day Iraq.  And for obvious reasons, I’m not going to Iraq.  That may change some day, just like no one in the 1960s would have thought we would ever be going to Vietnam or Cambodia for vacation!  However, by the end of 2019 I had completed my goal to seeing 6 of the 7 Wonders of the Ancient World.

Oldest Tourists Guide – How the List Came to Be

My goal came about as I researched the 7 Wonders of the Ancient World for a historical fiction book series I was writing.   Antipater of Sidon prepared the original list of Ancient Wonders in the form of a poem. And I think of it as the oldest tourist guide ever written. The poem emphasized mankind’s ability to build magnificent structures in the Mediterranean Rim countries. The poem stated the following:

‘I have set eyes on the wall of lofty Babylon on which is a road for chariots, and the statue of Zeus by the Alpheus, and the hanging gardens, and the Colossus of the Sun, and the huge labor of the high pyramids, and the vast tomb of Mausolus; but when I saw the house of Artemis that mounted to the clouds, those other marvels lost their brilliancy, and I said, ‘Lo, apart from Olympus, the Sun never looked on aught so grand.’

The later list included the lighthouse at Alexandria instead of Babylon’s Ishtar Gate being meant in the first line.

To write my historical fiction series I felt compelled to see these sites, some of which I had never heard of before.  Who was Mausolus and why was his tomb so important?  It was interesting to note that his “tomb” or “mausoleum” was the reason we still use that term today.  And I had heard of the Greek goddess Artemis, but where was her house?    After finishing my research, I had found my destinations.  2 locations in each country – Greece (including the island of Rhodes), Turkey, and Egypt.  And it ended up that I could accomplish my goal in two trips.  I was able to visit 3 of the 7 Wonders of the Ancient World on each trip.

1st of the 7 Wonders of the Ancient World

The only remaining ancient wonder still standing is the Great Pyramid of Giza.  As an engineer myself, looking at these immense structures you must be impressed by this accomplishment nearly 3000 years ago.

However, I was surprised at how small the Sphinx was and that it was farther from the pyramids than I realized.  Pictures are certainly deceiving, for the Sphinx looks to be right at the base of the pyramids.  Yet it is really a fair distance from them and only appears that way because people take its picture toward the pyramids.

Disregard the local people who are trying to sell camel rides, other goods, or offer to help take your picture.  Our tour guide explained that they often will not give your camera back after they have taken your picture until you give them money in return.  It’s best to ignore the locals even though they may pester you a lot.  And I was not surprised to find out that most of the goods they sell are not made in Egypt.

Obviously, this is the one major ancient wonder everyone needs to travel to see in their lifetime.  Cairo is unbelievably congested and difficult to travel in since it is one of the most populated cities in the world.  Therefore, I suggest that you take a tour to see this site and the Egyptian Museum.  Even better, schedule your trip so that you can see the new Grand Egyptian Museum (GEM), which now has slipped its opening to late 2020.  The GEM is very close to the pyramids and not as difficult to get to as the old museum.

2nd of the 7 Wonders of the Ancient World

I have been lucky to visit the Temple of Artemis at Ephesus twice now, once in 2014 and again in December 2019.  Most people go to Ephesus to see the ruins of the ancient city, especially the Library of Celsus.  In fact, when I went to Ephesus the first time, we had to back-track because we missed it. I was so enthralled with seeing the Ephesus city ruins that I forgot to even look for the Temple of Artemis.  And if you blink, you will miss it. For other attractions in Ephesus, see previous article 7 Ancient Sites to Visit in Western Turkey.

There is only a small sign and not much left of the once massive temple.  In 1973, they constructed only a single column on this location from drums of various leftover columns to mark the temple spot.  It stands on an originally preserved column basis from the late classical temple.  And the original temple columns would have stood about 13 feet higher than the remaining single column.  The temple had been built, destroyed, and rebuilt several times over its lifetime. And some of its columns were thought to eventually be used in the Hagia Sophia in Istanbul (Constantinople).

3rd of the 7 Wonders of the Ancient World

Heading across the Isthmus of Corinth from Athens to the Peloponnese side of Greece and continuing west, you can go to the place where the Olympics started.  At Olympia, you can gain entrance to the Ancient Olympic Site, and see the ruins of the Temple of Zeus that housed the statue of Zeus at Olympia.  I couldn’t believe that it only took about 13 years for the temple to be built (470-457 B.C).

The seated statue of Zeus was thought to be 41 feet tall and made of a composite material of gold and ivory. It took up much of the width and height of the building.  Earthquakes destroyed the Temple of Zeus in 522 and 551 A.D.  The statue may have been taken to Constantinople (and destroyed in a fire at the Palace of Lausus).

4th of the 7 Wonders of the Ancient World

Among the attractions to visit in the Turkish city of Bodrum (once known as Halicarnassus) was the Mausoleum of Mausolus.  For other attractions in Bodrum, see previous article 7 Ancient Sites to Visit in Western Turkey. In the 4th century BCE, Mausolus and his wife ruled the city and the areas surrounding it.  He decided to erect an elaborate tomb for himself, which became the first of many stately aboveground resting places called ‘mausoleums.’

The Mausoleum of Mausolus was reduced to its current state of rubble by a series of earthquakes in the 13th century.  It was difficult to grasp how it would rank as an ancient wonder until I saw a model of what they think the huge structure looked like.

A scaled model of the maulsoleum sits in a small museum on the property, giving visitors a better idea of how immense this burial site was.  It stood 135 feet high, with a complete 36 column pillar structure and step-pyramid roof on the top third.  Supposedly, there were hundreds of statues adorning the levels of the building.  I saw quite of few remnants of the marble frieze and other sculptured fragments in a covered portico to the south of the mausoleum ruins.

5th of the 7 Wonders of the Ancient World

During a cruise in December 2019, I was able to go to the island of Rhodes.  I was with a lovely couple from New Zealand who luckily had a good idea where the Colossus of Rhodes might have stood.  The Colossus statue was of Helios, Rhodes’ patron god, standing 108 feet over the two sides of the harbor. And it took approximately 12 years to erect (292-280 B.C.) and was destroyed by an earthquake just 54 years later.  Supposedly, the statue broke at the knees during the earthquake and fell onto land. But it remained there as a still impressive site for over 800 years.  We took pictures of the harbor entrance close to the Fortress of St. Nicholas where some believe the Colossus statue was located. However, there is still some debate as to the statues’ true historical location.

6th of the 7 Wonders of the Ancient World

On the same cruise in December 2019, we docked at Alexandria, Egypt.  I was able to just make out the area believed to be where the Lighthouse at Alexandria had stood before we docked.  Our tour group was heading into Cairo and did not stop to see anything in Alexandria.  So, I couldn’t stand on the spot where the 330 feet tall lighthouse had once stood.  I wrote extensively about the lighthouse in my first book, The Time Stones – Book 1 (Amazon).

The lighthouse was destroyed by several earthquakes but survived until around 1480.  It had three main levels: a square lower section, a middle octagonal section, and a top circular section.  A clockwise rotating ramp allowed carts to take fuel up to the top to burn and show mariners the way.  At the apex, a mirror reflected the sun during the day and the fire at night.  They believe a statue of Poseidon was on the very top.

7th of the 7 Wonders of the Ancient World

I want to add the latest speculation regarding the 7th Wonder of the Ancient World. There is new evidence that the Hanging Gardens did exist, although it may have been debated in the past. In fact, more evidence is coming to light that it was not in Babylon. But rather it was in Nineveh (part of modern day Mosul). I think it actually makes more sense too because the Hanging Gardens would have needed a lot of water. And Nineveh (Mosul) is located on the eastern bank of the Tigris River.

No mention of the Hanging Gardens has ever been discovered in over 100 documents found at the Babylon site. Even texts written by King Nebuchadnezzar II himself do not mention the gardens at all. However, recently an Oxford scholar had translated a cuneiform prism text that describes such a garden. King of Assyria Sennacherib in Nineveh lived 100 years before Nebuchadnezzar. And one of the bass reliefs from his palace walls called the “Garden Relief” shows a multitude of plants suspended on arches, irrigation, etc. Therefore, I would keep an eye out for more information to come on this being the true site of the Hanging Gardens.