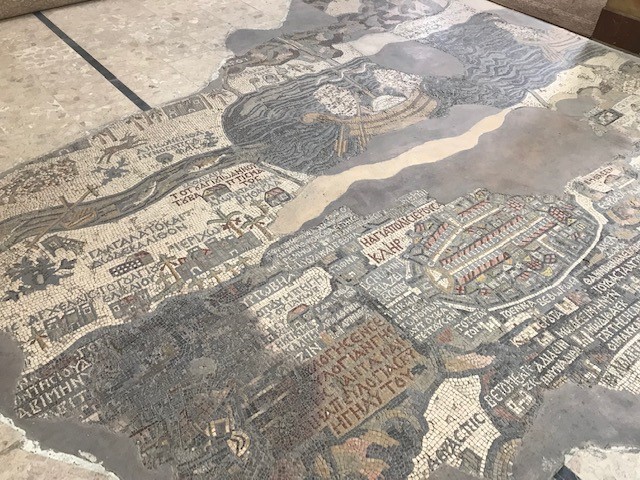 I watched a television show last year about the artful mosaics of Madaba on one of the travel or history channels.  The modern Arab city of Madaba is about 45 minutes south of Jordan’s capital city of Amman and 30 minutes from the Queen Alia International Airport (Amman Airport).  Visiting Petra and Jerash were my first reasons for traveling to Jordan, but I now had an additional reason.  The artful mosaics of Madaba may have been well known locally for many years, but they have only recently become more significant tourist attractions.  And what caught my eye, was the significance of one particular mosaic – the mosaic map on the floor of the St. George Church.

Scholars have determined the Church of St. George mosaic map to be the oldest topographic map representation of what would now encompass Jordan, Israel, the Palestinian territories, Lebanon, and parts of Egypt.  Moreover, the map has led scholars to finally locate some of the most notable lost biblical Christian cities, like Sodom and Gomorrah.

Discovery of the Mosaic Map

The ancient city of Medeba (Madaba), mentioned in the Old Testament (Numbers 21:30), has become famous for its many 6th century artful mosaics.  Builders of the St. George Church uncovered much of the mosaic map in the 1890s.  Archaeologists believe the map was created between 527 to 565 A.D. In particular, details of Jerusalem known to exist after 570 A.D. are missing from the map. Thus, archaeologists are fairly confident in the date range.  The mosaic map includes over 100 inscriptions of the regions’ rivers, cities, mountains, etc.

Recently, scholars proffered a theory that the mosaic floor was fashioned for a secular hall, rather than for an earlier Byzantine church.  Essentially, this theory was due to the maps’ orientation and lack of Christian imagery, composition, motifs, and inscriptions.

The church still holds Mass every Friday and Sunday (7am). For more details about visiting the church, check out TripAdvisor.

Even though the map restoration was completed in 1965, only one-third of the original map was recovered. Furthermore, artisans might have worked over 11,000 man-hours to create the full map.  The map is sporadic in parts, but the walls surrounding the city of Jerusalem are very noticeable.  And some of the details depicted, other than notable cities and sites, have recently led to more discoveries of ancient streets, churches, etc. in various locations.

A reproduction of the Madaba Map (with a key of details and explanations), are in the visitor’s center (ticket office and small gift shop). Similarly, the church walls display many other mosaic pictures.

Church of the Apostles

Next, I went to the Church of the Apostles to find additional examples that Madaba is home to other artful mosaics.  This ordinary-looking church contains remarkable mosaics, one dedicated to the Twelve Apostles. A parish priest named Don Giuseppe Manfredi discovered this church in 1902. Moreover, the center mosaic was completed in 578 A.D., according to documentation of an inscription that has since been destroyed.   Salamanios, the mosaic craftsman’s name, is located in the nave’s center medallion inscription.  Furthermore, Ammar Khammash designed the shelter to protect the church’s central nave and two aisles.

The mosaic piece in the central nave is nearly 10 ft. wide.  Particularly, the central portion of this main mosaic piece shows a woman, the female personification of the sea, surrounded by marine creatures.  Similarly, native animals, flowers, birds, fruits, etc. decorate each corner of the piece.

Two bulls and two rams decorate the area between the western inner wall and the strip of acanthus scrolls.  In addition, the face in the northwestern corner of the acanthus scroll is the expression of a season.

Many other mosaic carpets depicting various local animals cover the floor of the church. In conclusion, if you are visiting Amman, you must take the time to see these artful mosaics of Madaba as well.